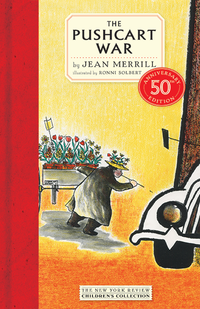 The Pushcart War by Jean Merrill

The Pushcart War turns out to be surprisingly memorable – the image of the pea shooters persists long after the book is closed, along with a comforting sense of something quietly important having been accomplished. David and Goliath stories are understandably satisfying to children, and there are many that have been written. This is a highly unusual one.

The Pushcart War of 1976 begins with the Daffodil massacre in which the pushcart of Morris the Florist is flattened by a Mammoth Moving truck and the unfortunate flower peddler is launched headfirst into a pickle barrel. In response to this act of blatant aggression on the part of the trucking companies, the pushcart peddlers go on the offensive, led by Maxie Hammerman (the Pushcart King) and General Anna (vender of apples and oranges). Their secret weapon, invented by the son of a Hispanic peddler named Carlos, is a yellow rubber straw loaded with a dried pea with a pin stuck through. During the Pea Shooter Campaign, the peddlers bring the trucks to a standstill, 18,991 flat tires to their credit. When Frank the Flower is arrested and the peddlers are forced to desist, the children of Manhattan quickly take up the battle in their stead. Through the unintentional complicity of a cleaning woman who practices her shorthand on an overheard conversation between The Three (as the owners of the three trucking companies are known), Maxie Hammerman is warned that he is targeted for kidnapping. In a delightful scene, The Three are tricked into a poker game at which the Police Commissioner is present (he is on the side of the pushcarts), and Maxie ends up winning $60,000 and an Italian bullet proof car. And on it goes, until the two sides make their peace. 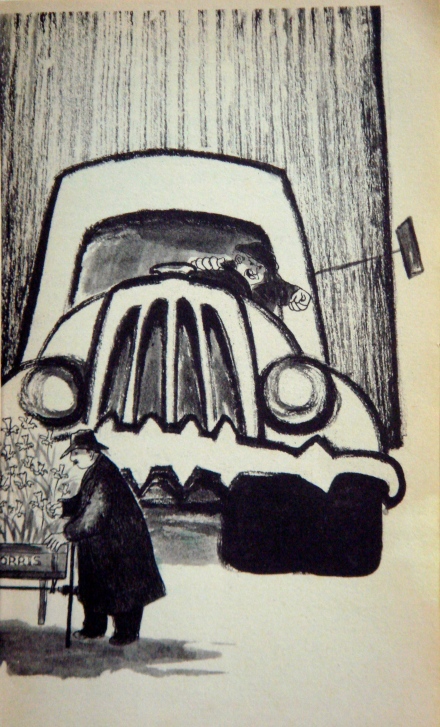 The book is unconventional in format (it is a mock historical document, set in the future, complete with footnotes, newspaper articles, and transcribed conversations) and unusual in its juxtaposition of humor with serious social themes (political corruption, working class oppression, citizenry revolt). Most unique is the use of adult characters (and many of them), none of whom take center stage. Most books for children feature child or animal protagonists, but in this story the few named children have walk-on parts at best. It turns out to make not a whit of difference to the children reading the book, many of whom become devoted fans.

One thought on “The Pushcart War”