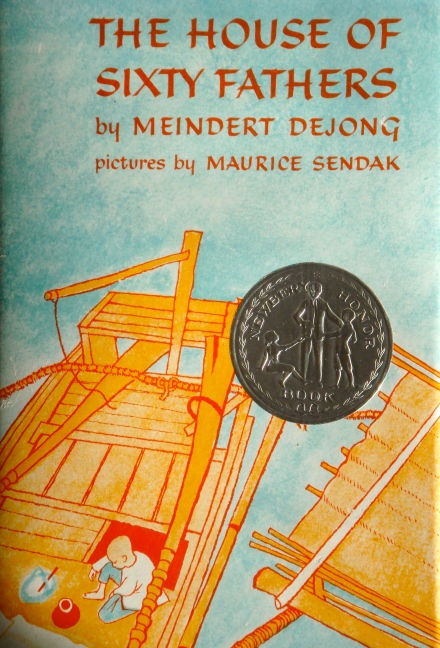 The House of Sixty Fathers

In 1941, a group of American pilots volunteered for a clandestine operation to assist the Chinese Air Force defend against the Japanese invasion.  Under the command of the legendary Claire Lee Chennault, the Flying Tigers became populist heroes for their piloting daring-do, renegade spirit, and success despite unequal odds.  When the U.S. officially entered WWII after the attack on Pearl Harbor, Chennault’s mercenary group became the nucleus for the U.S. Air Force presence in China – the nickname and the hallmark shark mouth design that decorated the noses of the bomber planes were retained.  Meindert DeJong (pronounced DeYoung), a Dutch-American writer who was just beginning his career as a children’s author, joined Chennault’s forces in China as a military pilot and historian.  His outfit adopted a Chinese war orphan and DeJong tried unsuccessfully to bring the boy to the U.S.

This true story was the genesis for The House of Sixty Fathers.  Tien Pao, a young village boy, is separated from his parents and baby sister when his sampan is swept down the river into Japanese territory.  Accompanied only by his pig, Glory-of-the-Republic, he hides in tiny caves by day and travels through the mountains by night, reduced to eating leaves to stave off his hunger.  He saves the life of a downed American pilot and the two are befriended by Chinese guerrilla fighters who assist their escape from Japanese soldiers.  Tien Pao makes his way to the town where he last saw his family, only to find it under attack, its inhabitants fleeing in confusion.  He eventually finds refuge in the house of sixty fathers, the dormitory of the American bomber pilots, until his moving reunion with his parents.

Meindert DeJong’s genius was his ability to convey the world through the eyes of his protagonist, whether that be a Dutch girl or a stray dog.  In this book, he views the complexity of wartime from the vantage of a Chinese peasant boy – the thrill of witnessing the routing of an advancing Japanese column by a solitary strafing plane alongside the horror of watching terror-stricken horses drowning, his disgust at a starving child eating mud along with the visceral joy of his first taste of chocolate, the selfish desperation of refugees throwing themselves upon a packed train along with the emotionless empathy of a soldier who plucks him from the crowd to safety.  With unflinching honesty, DeJong presents the fear, loneliness, and chaos of war along with the comfort of human companionship, the anchoring influence of family, and the reassurance of a pet, however porcine.  Both frightening and reassuring, this is one of the most powerful stories of wartime ever written for children.