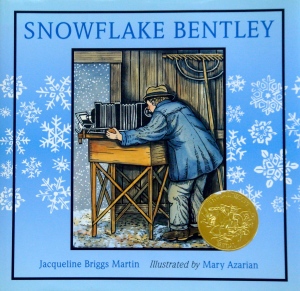 What a richer place is the world because of those eccentric seekers who pursue a passion with single-mindedness of purpose.  Such a one was Wilson Bentley.  He was raised on a farm in the snowbelt of Vermont, an area that receives as much snow in a year as the Amazon does rain.  His fascination with snow began as a child and continued until his death at age 66 after a six hour walk home in a blizzard.  At 15, his dear mother gave him an old microscope through which he could visualize individual snow crystals.  Two years later, for a sum equivalent to the family herd of ten cows, his skeptical father purchased a bellows camera and compound microscope.  After months of heartbreaking trial and error, he became the first to photograph an individual snowflake (this at the age of 19).  Though self-taught and initially the butt of ridicule, he eventually became an acknowledged expert, publishing articles in Scientific American and National Geographic, writing the entry on snow for the Encyclopedia Britannica, and gathering his images into a volume, Snow Crystals, which is still admired today.  At the time of his death, he left a legacy of 5,381 photographs of snowflakes.

Bentley’s life story is an inspiration to children in a way that many larger-than-life biographies are not.  With simple observation and passionate dedication, he made pioneering discoveries, including the remarkable realization, made when he was only in his teens, that each snowflake, in all its wondrous geometrical intricacy, is unique. In Snowflake Bentley, Jacqueline Briggs Martin tells his story with a moving lyrical voice.  The elegiac tone seems apt for one who devoted his life to capturing the beauty of the most ephemeral of natural wonders.

In an interview conducted towards the end of his life, Bentley recalled a singular snowflake.  “”But we had one storm last winter which brought me perhaps the most interesting snow crystal I have ever seen: a wonderful little splinter of ice, incredibly fragile.  That was a tragedy!….In spite of my carefulness, the crystal was broken in transferring it to my slide.’  His voice actually shook with emotion.  ‘It makes me almost cry, even now,’ he said, as if he were speaking of the death of a friend.” 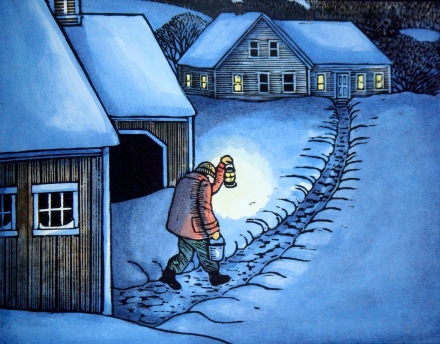 Mary Azarian was awarded a Caldecott Medal for her woodcut illustrations.  Their bold black lines and rich hand-tinted water colors perfectly complement the simple rusticity of Bentley’s rural Vermont life.  Azarian has illustrated over 40 books, many with nostalgic images inspired by her own life on a Vermont farm.

Aside:  In the days

when farmers worked with ox and sled

and cut the dark with lantern light,

there lived a boy who loved snow

more than anything else in the world.