The Children of Green Knowe by Lucy M. Boston

“A little boy was sitting in the corner of a railway carriage looking out at the rain, which was splashing against the windows and blotching downward in an ugly dirty way. He was not the only person in the carriage, but the others were strangers to him. He was alone as usual. There were two women opposite him, a fat one and a thin one, and they talked without stopping, smacking their lips in between sentences and seeming to enjoy what they said as much as if it were something to eat. They were knitting all the time, and whenever the train stopped the click-clack of their needles was loud and clear like two clocks. It was a stopping train – more stop than go – and it had been crawling along through flat flooded country for a long time. Everywhere there was water – not sea or rivers or lakes, but just senseless flood water with the rain splashing into it. Sometimes the railway lines were covered by it, and then the train noise was quite different, softer than a boat.” 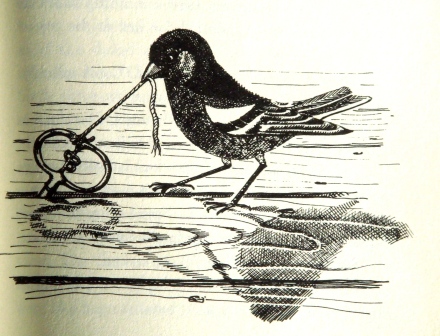 So begins The Children of Green Knowe. And already we are witness to a rare exquisite prose and a gift for conveying character, describing nature, and creating mood. Lucy Boston penned this, her first manuscript, at the age of 62, and she proceeded to write six volumes of the Green Knowe chronicles, inspired by the 12th century Norman house that was her home.

Tolly is en route from his lonely boarding school existence to spend the Christmas holidays with his great grandmother in the ancient castle of Green Knowe. Mrs Oldknow provides the kindness, wisdom, and solace that is lacking in his life, his father and step-mother being off in remote Burma. She shares with him the stories of three children who lived at Green Knowe in the 17th century, and gradually Toby, Alexander, and Linnet come to people Tolly’s world. Lucy Boston is able to convey perfectly the palpable richness that accompanies the spirit children, even when they are invisible and silent, contrasted with the flat emptiness when they are absent.

The beautiful blend of reality and fantasy that is introduced in The Children of Green Knowe is continued in The Treasure of Green Knowe, every bit as good as the first. This time “the others”, who come from the turn of the 19th century, are Susan, a young girl blind from birth, and Jacob, a slave boy from Barbados brought to England to be her eyes. The Green Knowe chronicles, with their breathtaking writing, are a treasure of children’s literature, and it is a shame that they are so little known.

Box:   “At one side there was a beautiful old rocking horse – not a “safety” rocking horse hanging on iron swings from a centre shaft, but a horse whose legs were stretched to full gallop, fixed to long rockers so that it could, if you rode it violently, both rear and kick.”

Box: “At school he was learning to ride real horses. They were not, alas, at all like Feste, Toby’s horse. Their coats were not shining silk but rough like railway upholstery, and when one patted them, clouds of dust came out.”

One thought on “The Children of Green Knowe”