For seven decades, William Steig was instrumental in defining the visual landscape of The New Yorker. At the age of 23, during the Depression, he sold his first cartoon to The New Yorker for $40. By the time of his death at 96, he had contributed over 1,600 cartoons and 200 covers to the magazine. At an age when most people are winding down, he launched his second career. He was around 60 when he published his first children’s book. His fortieth was published several months before his death. For productive longevity, he was unparalleled. He was also unmatched for his combined brilliance as an illustrator and writer. 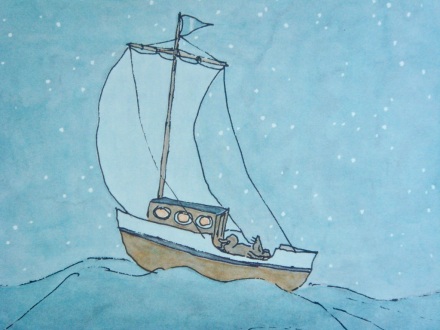 The most lyrical and poetic of his books is Amos & Boris, an ode to the transcendent friendship between a mouse and a whale. Amos, enterprising and adventurous, builds a boat and takes to the sea (fulfilling a boyhood longing that Steig harbored). One night, feeling at one with the universe, he rolls off his boat and it goes sailing on without him. After a night of loneliness and despair, alone in the vast ocean, he is rescued by Boris, and in their ensuing week together, an abiding friendship grows. Years later, Boris is beached during a violent storm and Amos is able to effect his rescue in turn. 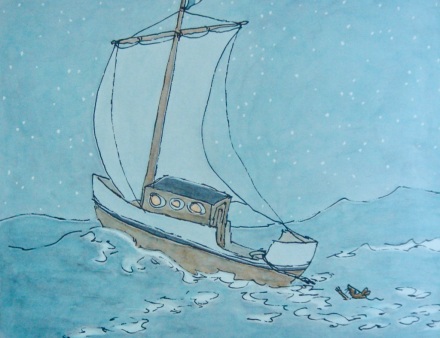 In this book, as in many of his, Steig quietly alludes to the ineffable questions that perplex us all. What are we doing here? What is it all about? What is our role in the scheme of things? And in Amos’s case, would there be other mice in heaven? Steig’s worldview is not angst-ridden, far from it. His tonal palette is playful, humorous, life-affirming, passionate and mysterious. His answers revolve around friendship, love, and family.

Steig’s illustrations, supple India ink lines and watercolor washes, were created with a childlike spontaneity and pleasure. His prose is startling in its complexity, elegance, and sheer joy. Steig delighted in word play (“’Pheasant, peasant? What a pleasant present!’”) and archaic vocabulary (“churlish knave”, “fusty fens”). He had a precise verbal eye, as when Boris is rolled “breaded with sand” into the sea or when Amos listens to the surf sounds, “the bursting breakers, the backwashes with rolling pebbles”. Who else has ever written like this for children?

Aside: “One night, in a phosphorescent sea, he marveled at the sight of some whales spouting luminous water; and later, lying on the deck of his boat gazing at the immense, starry sky, the tiny mouse Amos, a little speck of a living thing in the vast living universe, felt thoroughly akin to it all. Overwhelmed by the beauty and mystery of everything, he rolled over and over and right off the deck of his boat and into the sea.”