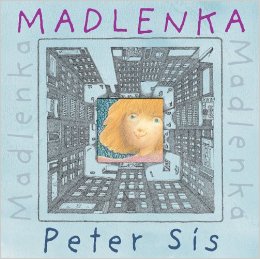 East of Tribeca and west of the Brooklyn Bridge, there is a city block ringed with apartment buildings, in one of which lives a young girl named Madlenka. She has a loose tooth, which news she is anxious to share with Mr. Gaston, the French baker. What follows are several pages of all things French, from his greeting (“Bonjours, Madeleine”) to patisserie cuisine (croissants, financiers, madeleines) to French icons (Tour Eiffel, Arc de Triomph, Puss ‘n Boots, the Little Prince, the original Madeleine). A square cut-out creates a window into the mysterious bakery from one side and out to Madlenka on the sidewalk from the other. She proceeds to circumnavigate the block announcing her news to Mr. Singh in his newsstand, Mr. Ciao the Italian ice cream vendor, Ms. Grimm the German opera diva, and more. We see elephants and turbans, the Leaning Tower of Pisa and Pinocchio, and the Bremer Town Musicians and a Wagnerian Brunnhilde (double dots over the u). There is a density and complexity of visual information that defies a single perusal, beginning with Sis’s detailed cross-hatched rendition of the city block, drawn from a dizzying Escheresque perspective – it is at once a bird’s eye view of the buildings ringing a central garden and a pedestrian’s view of the facades as seen from the sidewalk. Another visual legerdemain is seen in a wolf’s mouth in which the white teeth are also the lit windows of an old-fashioned passenger train.

Madlenka is a hymn to the richness of a New York City childhood and the cultural odyssey afforded by a walk around the block. Sis captures the joy and imagination of a child who is known and loved by her exotic immigrant neighbors – easy to do, perhaps, since the girl is based on his own daughter. This is one of Sis’s most accessible books and one that can be read repeatedly without wearing thin

Peter Sis (rhymes with peace) penned several loftier books, among them Starry Messenger, which tells the story of Galileo, and The Tree of Life, a biography of Darwin. These are the kind of beautiful books that might be given by a sophisticated aunt to spark a young mind to tackle The Voyage of the Beagle or to develop a passion for astronomy. These are wonderful books for a long winter’s read in front of the fireplace with plenty of time to wonder at the intricate drawings and digress into the footnotes.

It makes sense that Sis should be drawn to non-conformists – visionaries who demonstrated rare courage in challenging conventional wisdom. Sis grew up in Czechoslovakia, as he describes in the graphic memoir, The Wall: Growing Up Behind the Iron Curtain. Corrupted by rock and roll, he rebelled against the repression of the Communist state, and eventually defected to the United States. Initially a film-maker, Sis became a children’s book illustrator and writer, encouraged along the way by Maurice Sendak, but he has also created a NYC subway mural, a stage set for the Joffrey Ballet, and over 1,000 illustrations for the NY Times Book Review. For his myriad accomplishments, he received a MacArthur “genius” Award, one of only a handful of children’s writers or illustrators to be so honored.