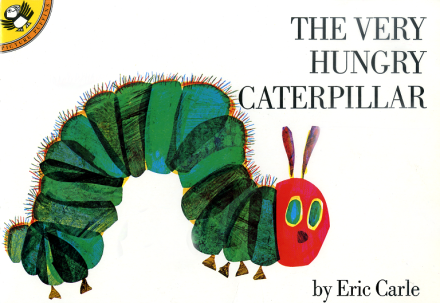 Eric Carle created The Very Hungry Caterpillar at the beginning of his career and it remains his most popular book. A caterpillar emerges from an egg and begins eating. Over the course of a week, he eats through a variety of fruits – one apple, two pears, three plums, four strawberries, five oranges – and then gorges himself on a sickening feast that includes an ice-cream cone, a pickle, and a slice of watermelon. Curing his stomach ache with a nice green leaf, he spins himself a cocoon and then emerges as a beautiful butterfly. With a minimum of fuss, a child has learned the days of the week, a few numbers, and the miracle of metamorphosis. A young child never ceases to be intrigued by the worm holes, just the size for a tiny finger, that go right through the foods on the page.

The Very Hungry Caterpillar was the first of several “very” books which combine natural history, life lessons, and a multi-sensory component. The Very Busy Spider features the gradual building of a web, raised Braille-like on the page so there is a textural dimension. The Very Quiet Cricket ends with the realistic sound of a cricket chirping, while The Very Lonely Firefly includes the magic of twinkling lights. Carle avoids what in other hands might feel gimmicky by his obvious respect and wonder for the natural world.

Carle’s illustrations have a deceptive air of simplicity. He creates collages with pieces of tissue paper painted with acrylic so there is considerable richness of texture and vibrancy of color. The technique, in his hands, is wonderfully suited to animals, insects, plants, and landscape. Less so to humans, who have calamine pink skins and thick legs. To see more of his art, visit The Eric Carle Museum of Picture Book Art in Amherst, Massachusetts, which also features rotating exhibits of the many gifted artists who have enriched the world of children’s book illustration.