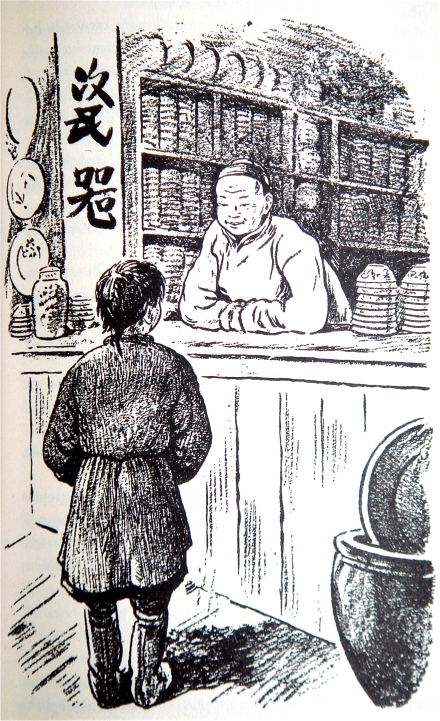 Daughter of the Mountains by Louise Rankin

Since her earliest memories, Momo has longed for a red-gold Lhasa terrier, a breed she had seen at the Kargayu monastery where it was favored by the head lama.  She lives high up in the mountains along the Great Trade Route between Tibet and India with her father, who carries the mail pouch over the Jelep La pass, and her mother, who runs a tea house for the mule caravans.  Momo’s wish is finally granted when a trader leaves a motherless puppy in her care.  But two years later, a muleteer steals her precious Pempa with plans to sell him to an English woman in India.  Momo runs down the mountain in pursuit, so launching an exciting series of encounters and adventures which ultimately land her in Calcutta.

This is no Lassie of the Himalayas since the dog, despite being the impetus for Momo’s adventure, makes only a couple of brief appearances.  It is, rather, the tale of a resourceful girl with unwavering resolve, single-mindedness of purpose, good humor, and quiet courage in face of a novel and often intimidating world.  Momo makes a remarkable cultural odyssey, from a materially austere but spiritually rich world in the high Himalayas to the teeming city on the low plains of India with its olla podrida of language and religion.  Momo wears a dark woolen robe tied to create a pouch in which she carries her worldly possessions – a tea cup, some bread cakes, and a string of dried cheese beads.  In the market town of Rongli, she sees Hindu women in brightly colored saris, Indian traders in dhotis, hill men with banana leaf caps, and at the station platform in Siliguri Moslem women in burkahs and Sikhs with turbans.  In the bazaar, she sees her first oranges and bananas, fruits she had only heard described by caravan drivers in her mother’s tea shop.  She passes from the clear thin air of the high Himalayas to the rhododendrons and orchids of the lower slopes to the monkeys of the tropical forest to the heavy humidity of the Indian plains.

Louise Rankin, an American who moved to India with her husband in the 1930’s, was blessed with an observant eye.  The authenticity of her description of culture and terrain is matched by the verisimilitude of Kurt Wiese’s illustrations.  Short of getting on a plane, there is no better way to introduce children to a foreign culture than through a good book, and this is one of the best in the genre.