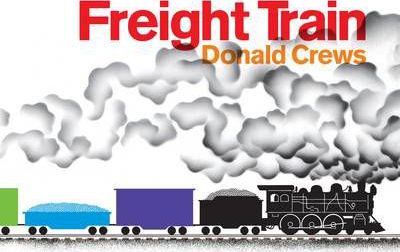 There is something irresistible about trains: whether it be counting the cars on a long Santa Fe freight, or standing on an overpass and feeling the whoosh as a locomotive passes below, or taking an overnight with the pull-down bunks in the sleepers, or listening to a whistle in the quiet of a summer night. Unlike the obsession many 2 and 3 year olds have with backhoes and caterpillars, the fascination with trains is lifelong.

Donald Crews is an author/illustrator who has explored this fascination repeatedly, beginning with the elegant Freight Train. Born and raised in Newark, NJ, he had a father who worked on the railroad. During the summers, his mother took the children by train to Florida (it took 3 days and 2 nights) to visit their grandparents. In his dedication, Crews refers to “the countless freight trains passed and passing the big house in Cottondale”.

Freight Train begins with a double page spread that is blank save for a track traversing the bottom and a simple introduction. On the following pages, the cars are introduced, one by one, each a different color. We see the stationary train in its entirety, and then it begins moving, the image becoming blurred as it picks up speed. The train passes through a tunnel (glimpsed through a rock window), over a trestle, past city skyscrapers, through the blackness of night and the whiteness of day, until it is gone, with only a trail of smoke marking its passage. Through its journey, the track is continuous on every page.

The text is spare and simple, yet remarkably elegant.

“A train runs across this track.

Red caboose at the back

A Black tender and

As the train begins moving, the words change rhythm to evoke the klakity-klak of locomotion. There are only 55 words, but each is perfectly placed.