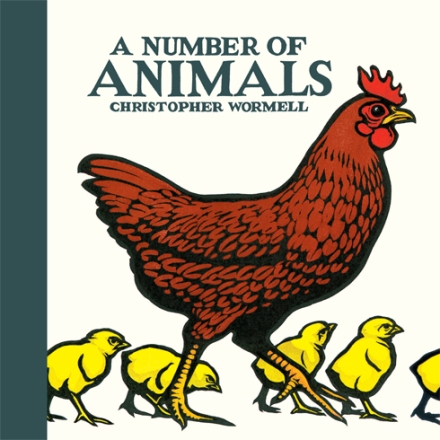 A Number of Animals by Christopher Wormell and Kate Green

Of the thousands of alphabet and counting books, we should be grateful for the good ones, for the process of learning the ABC’s and the numbers requires repetition, and the mediocre ones quickly become tedious.

Christopher Wormell’s first contribution to this genre was An Alphabet of Animals, a book that was awarded the Graphics Prize at the Bologna International Children’s Book Fair. The format was one that he has used repeatedly. Text is on the left page, in this case simply the letter and the animal name (Qq, Quetzal, Ss, Swan, Tt, Tiger, Zz, Zebra).   Image is on the right. The animals, outlined in bold black lines, are depicted in striking linoleum block prints. The backdrops are minimal – at most there might be a tree with windfall apples for the pig, two pyramids behind the hooded cobra, or a skeleton beneath the hunched vulture. Most often there is a luminous yellow foreground and a luminous blue sky above – never a cloud to mar the purity. It is the beautiful stippled shading of sky (lighter, more golden, at the horizon, as though the sun were always about to rise) that gives the illustrations their radiance.

For his first counting book, A Number of Animals, Wormell collaborated with Kate Green, who provided a narrative. The text begins, “One little chick, lost and alone.” A solitary yellow chick, in search of its mother, asks for help from the horses, cows, turkeys, goats, geese, sheep, ducks, and pigs he encounters, in sequentially increasing numbers. In each illustration, the tiny chick is dwarfed by the large animals – part of the pleasure for a child is being able to spot the plucky little thing. The text is written with an ear to cadence and poetry, but each page is distinctive – not the repetitive sing-song that characterizes so many children’s books.

“Have you seen my mother?”

But all they do is moo.

Their beards are hairy. Their horns are sharp.

Wormell’s lino-cut prints are always striking, but it is the marriage of text and visuals that makes this book interesting, even when read many, many, many times.

Like Robert Lawson, Christopher Wormell cut his artistic teeth making Christmas cards. He was taught the art of making linoleum block prints by his father and every December the household was transformed as the children contributed to the cottage industry of handmade holiday cards.