Voyage to the Bunny Planet by Rosemary Wells

Voyage to the Bunny Planet comes as a sweet boxed set with three slim volumes. It deserves pride of place in every nursery library, as much for parent as for newborn, for it serves as the perfect introduction to the upcoming adventure.

In each story, a young bunny child has a trying day. Take Felix in The Island Light. He suffers the humiliation of being sick in art class at school. The Soviet army-style nurse gives him scalding tea that burns his tongue. After a punitive visit to a doctor, he takes a distressingly icy shower. His parents, distracted by the malfunctioning boiler, neglect to kiss him goodnight. 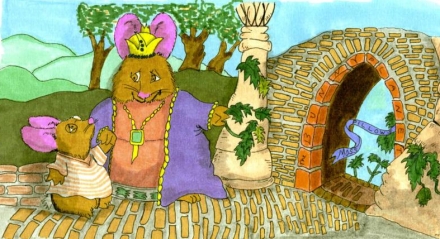 Janet the Bunny Queen soars down from her celestial kingdom and carries Felix off to the Bunny Planet. He passes through an archway and lives the day that should have been, described in rhyming couplets. On a small island, Felix and his lighthouse keeper father weather a storm in their snug home, make apple pancakes, play gin together before a fire. The comfort of the scene is palpable, as is the closeness of father and son. 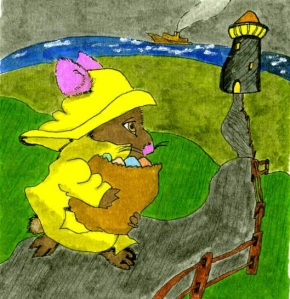 Of the 125+ books that she has written, Rosemary Wells said that Voyage to the Bunny Planet best describes her spiritual core. With wry humor and empathy, she presents a litany of the miserable or humiliating moments of childhood – each one of which strikes a chord of recognition. The alternate reality of the Bunny Planet captures the ineffable magic of childhood – harvesting the first warm tomato of the summer, helping the mother make a soup, falling asleep on a mossy forest floor, making toasted tangerine (“Place the sections on a log, directly in the sun. Wait until they’re warm and crisp. Eat them when they’re done.”) Rosemary Wells’ vision encompasses both the tribulations and the quiet joys of childhood, but the spirit of a benevolent world, here embodied by Janet the Bunny Queen, always prevails. 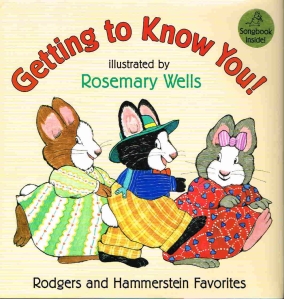 Aside: Rosemary Wells is always on the side of the angels. She created Getting to Know You as a celebration of the glorious and timeless Rogers and Hammerstein songbook. Sing the songs and see the musicals – Oklahoma, Carousel, The King and I, South Pacific. From exuberant (“Shall We Dance?”) to lyrical (“When the Children Are Asleep”), from funny (“Happy Talk”) to poignant (“If I Loved You”), in the canon of Broadway musicals, it doesn’t get any better than this.