Dick King-Smith arrived late at writing, having exhausted prior careers as a soldier, a farmer, and a teacher. As though he needed to make up for lost time, he was remarkably prolix over a 30+ year stint, and turned out over one hundred books, most inspired by his knowledge of the barnyard. In his banner year, he published almost a book a month. No need to read all these. Pick one, and make that one Babe: The Gallant Pig, and you will have found the silk purse.

Farmer Hagget goes to the village fair and wins a piglet in a “Guess my weight” contest. His voluble wife, whose defining characteristic is the run-on sentence, finds pleasure in the prospect of ham for Christmas. Babe, forever ignorant of his intended fate, is taken in by Fly, the black-and-white collie who teaches him the rudiments of sheep herding. Through his friendship with Ma, the aged ewe, Babe decides to adopt politeness as his modus operandi (“’If I might ask a great favor of you,….could you all please be kind enough to walk down to that gate….’”) rather than the snapping rudeness practiced by sheep dogs (“’Move, fools!….Down the hill. If you know which way ‘down’ is.’”)   The sheep, never before addressed with respect, are only too pleased to do Babe’s bidding. Using this approach, Babe saves the herd from sheep rustlers, thus saving his own neck from any future chopping block. He later takes on two dogs who have been worrying the sheep, and in the case of Ma fatally so, and he comes close to being summarily executed when Farmer Hagget believes mistakenly that Babe is the culprit. In the climactic final chapter, when he appears at the Grand Challenge Sheep Dog Trials, he is assured a place in the annals of sheep dog (or sheep-pig) history, to the cheers of spectators and readers alike. 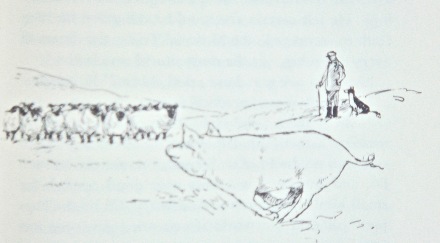 Few books are honored by the films that are ostensibly made in their image. Think of the Disney Winnie-the-Pooh empire as a particularly egregious example. Babe is an exception. Read the book first (needless to say), but then it is fine to see the movie. King-Smith’s animals are realistic (his pigs eat swill, his dogs snap at sheeps’ hocks, his sheep get foot rot) in all but their speech. The movie is faithful to that premise – the animals are real, but they can talk. The cast has been swollen to include a few invented characters (a dog, a cat, a duck) to round things out, and the Hagget couple has lost a bit of their nuanced complementary relationship in favor of a more stereotypic humerous bond, but these adjustments work well for the screen. And then it is a pleasure to return to the book to appreciate its more subtle workings.