The Cow Who Fell in the Canal by Phyllis Krasilovsky

The protagonist is Hendrika, a cow who grows restless, bored by her bucolic life with its monotonous cycle of chewing grass and making milk. The perpetual turning of the windmill makes her dizzy. She has the wanderlust – relieved one day when she falls into the canal, mounts an old raft, and floats her way to the city. Disembarking to the wonder of the inhabitants, she runs through the streets, savoring the novelties, until she happens upon the cheese market. There she encounters Mr. Hofstra, her farmer, who takes her back home. She returns to her pasture wearing a straw hat with streamers as a souvenir and is now content, enriched by her memories. It is a day-in-the-life story, albeit an unusual day, and it is delightfully free of morals. 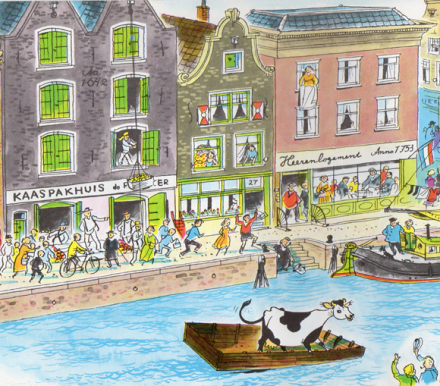 Peter Spier’s illustrations are what make this tale come alive. Like Richard Scarry, he fabricates richly detailed drawings that create a visual chorus to enliven the simple text. He conveys essence of Netherlands with a herring cart, bicycles leaning against a wall, wooden shoes, canals, and stair-cased roofs. For a child, there is much to absorb on every page.

Spier has illustrated over 150 books and was honored with both the Caldecott Medal and the National Book Award for Noah’s Ark, a textless story perfectly suited to his delicate pen and ink watercolors. His most ambitious undertaking was People, an encyclopedic celebration of human diversity. The cover illustration includes some 500 humans and each one, even the tiny figures in the back row who are conveyed with only a few strokes, is an individual with a recognizable culture. He has a playful sense of humor, evident in the display of noses or hairstyles. He touches briefly on intolerance, inequality, and bullying and he shows a shanty town as well as a suburban neighborhood with the mansion on the hill, but the overwhelming sense is one of wonder at the splendorous variety of it all. On a single spread, he imagines how deadly life would be with soulless uniformity – army green buses, brown clothed humans, and identical boxy buildings. What a relief to turn the page and return to the colorful and exhilarating confusion of humanity. Here is a generous spirited artist who shares through his drawings his belief in the fundamental goodness of people, a characteristically Dutch attribute. All the more remarkable since Peter Spier spent several of his teenage years in Theresienstadt concentration camp.