It was by either a stroke of luck or genius (and more likely the former) that Carlo Collodi created Pinocchio’s nose.  Long after the Blue Fairy has faded from memory, the nose remains, and this is the image that gives Pinocchio staying power.

Pinocchio entered the popular canon in the U.S. through Walt Disney, but it is a different experience to read the original.  Carlo Collodi (pen name for Carlo Lorenzini) wrote the tale to be serialized in a children’s newspaper, Giornale per i Bambini, and the 36 chapters are the perfect length for bedtime reading over the course of a month.  There have been many editions featuring many illustrators and translators over the 125+ years since it was published (in 1883).  Choose carefully.  One of the few artists who does justice to the intelligence of the tale is the Bulgarian, Iassen Ghiuselev, whose eye captures both the humanity and the surreality of the story. 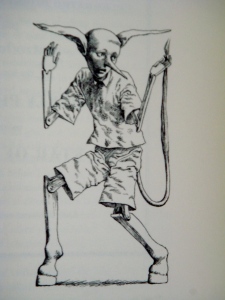 The revelation when reading Pinocchio is how rich and sophisticated it is, and also how chaotic and haphazard.  The imagery is bizarre and allegorical.  Consider the four black rabbits bearing a small black coffin into Pinocchio’s sick room, or the poodle in ornate livery who attends the Lovely Girl with Blue Hair.  Think of the transformation of the self-indulgent boys in Play Land into jackasses, beginning with the long ears.

Recall the memorable pair of incorrigible ruffians, the lame Fox and the blind Cat, who convince Pinocchio that burying his five gold coins in the Field of Wonders will result in incomparable wealth from a money tree.  Visualize poor old Geppetto within the belly of the Terrible Shark sitting at a candle-lit table eating tiny, live fishes.  There is a darkness here (how different from Alice in Wonderland).

Pinocchio achieves moral transformation, but he stumbles repeatedly along the way.  With each calamity, he renews his resolve (to go to school, to tell the truth, to help his father) only to break his resolution with the next temptation.  Despite his thoughtlessness and superficiality, Geppetto, the Blue Fairy, and the Talking Cricket never give up on him.  He is endlessly likable.  Pinocchio may be foolish, exuberant, gullible, light-hearted, and altogether human in his errors, but he is never mean-spirited.