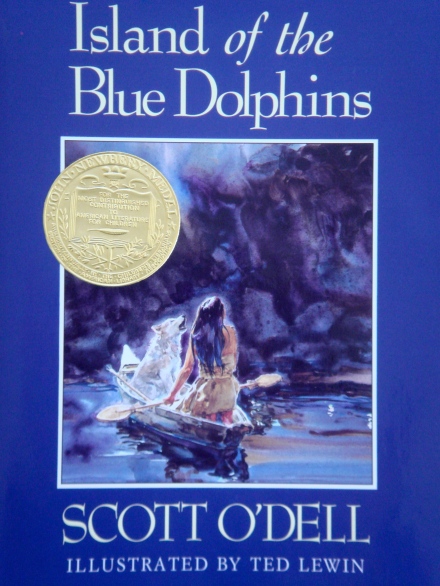 Island of the Blue Dolphins by Scott O’Dell

Survival in the wilderness makes for an oddly compelling story. Robinson Crusoe, the original castaway, launched the genre. Written in 1719, Daniel Defoe recounts the tale of a shipwrecked Englishman who makes a life for himself, fortified by the Bible, a herd of goats, and his man Friday (never was a footprint in the sand so welcomed – as much by the reader as by Crusoe). A quarter millennium later, Jean Craighead George wrote Julie of the Wolves. An Inuit girl gets lost in the Alaskan tundra, and her survival is dependent upon her acceptance by a wolf pack. The two books reflect a sea change in attitudes towards human civilization and nature between the 18th and 20th centuries. 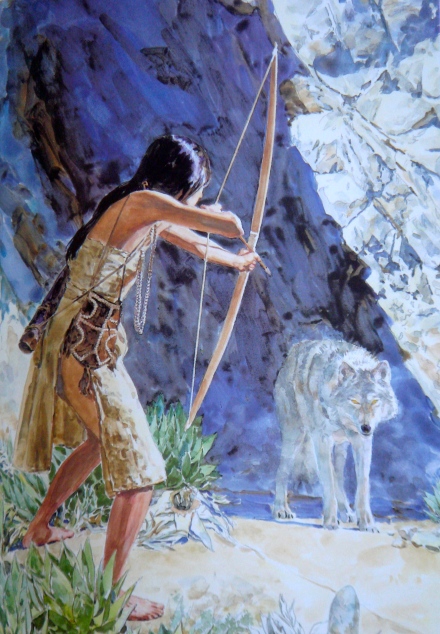 In Island of the Blue Dolphins, the 12 year old Karana is neither castaway nor lost. She is simply left behind, to live a solitary existence on the island that was always her home. A member of the Nicoleno tribe, her community is decimated by Aleut and Russian sea otter hunters who make her island their base. The surviving tribespeople are rescued by a ship sent from the mainland, but Karana swims ashore to save her younger brother and a storm forces the ship’s departure. After the boy’s death by wild dogs, Karana is alone. She builds a fortified home with a whale bone fence, hunts and gathers a diet of abalone, fish, and tubors, tames the alpha dog to be her companion, and makes peace with her solitude. After 18 years, a ship arrives and she leaves her island home. Scott O’Dell based his Newberry award-winning book on the true story of the Lost Woman of San Nicolas. In reality, her “rescue” in 1853 was followed by her death from dysentery after only a few weeks of life in Santa Barbara.

San Nicolas is one of eight Channel Islands that lie off the coast of southern California. Five of the islands comprise the Channel Islands National Park and each of them warrants a visit. The layers of human history (Indian middens, abandoned ranch buildings, tales of rum-running during Prohibition) are interwoven with remarkable wildlife. Visit Santa Rosa for its stand of Torrey Pines and its pygmy mammoths (no longer roaming), Anacapa for its miniature yellow coreopsis forests and surfing seals, Santa Cruz for its cathedral-like Painted Cave (the world’s longest sea cavern), Santa Barbara for its gale-force winds and brown pelican rookeries, and San Miguel for its beach with 100,000 noisy pinnipeds hauled up in the sun. San Nicolas, home to a desolate navy outpost, is accessible to only a few.